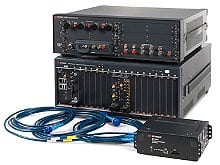 new PXIe vector transceiver and is described by the company as a single configuration that scales from sub 6 GHz to millimeter wave. The company said that the base 5G base station manufacturing test solution utilizes common hardware and software platforms that support 3GPP’s 5G New Radio Release 15.2.0 standards, including Keysight’s own PathWave platform, to allow network equipment manufacturers to “transition from [research and developemtn]design validation, to integration and verification, to volume manufacturing,” in terms of both conducted and over-the-air testing.

“The introduction of Keysight’s 5G base station manufacturing test solution enables network equipment manufacturers around the world to ramp up 5G manufacturing,” said Giampaolo Tardioli, VP of Keysight’s Network Access group, in a statement. “The scalability across sub-6GHz and mmWave frequencies, compact design and superior RF performance of the S9100A, offer users a clear and rapid path from design validation to volume manufacturing.”

In other test news:

Meanwhile, in San Diego, California, the story was much the same: Verizon and T-Mobile US tied for overall performance, network speed and data performance — but Sprint shared three awards, including its first award in the network reliability category (which it shared with Verizon and T-Mo) and text performance (shared with AT&T and T-Mobile US). As in Portland, AT&T came out on top in terms of the fastest median download speed: 36.4 Mbps.

RootMetrics noted that Sprint had made “significant strides in data performance,” however, with its median download speed jumping from 17.1 Mbps to 29.9 Mbps since the last time RootMetrics tested the San Diego market.

–EXFO has new 400G test offerings that leverage its Open Transceiver System. EXFO describes its OTS as a ” modular design concept that enables compatibility between current or future high-speed transceivers and EXFO’s test platforms” for both lab and field testing. Swappable inserts that test specific transceiver types “eliminate the need to replace entire testing modules and can be interchanged directly in the lab, out in the field or on the production floor,” the company said.

–Rohde & Schwarz launched a newly revamped R&S FSW signal and spectrum analyzer. The company said that all of its FSW models with a max input frequency of 26.5 GHz and above have an option for 2 GHz of internal analysis bandwidth, and 800 MHz of bandwidth for real-time analysis. The instrument also has a new “operating concept” and a recorder for remote-controlled test sequences. Rohde also said that the new FSW models have  up to 10 dB lower phase noise compared with the previous models, which it said is “extremely important in applications such as troubleshooting the modulation of 5G signals in the microwave range.”

–Keysight’s Ixia said that its Ixia CloudLens software-as-a-service visibility platform now provides packet-level visibility for network traffic from virtual machines through Microsoft Azure’s Network Terminal Access Point. CloudLens “provides a sensor that can be configured through APIs from Azure Infrastructure as a Service,” Ixia said, which “enables the user to forward network traffic to the CloudLens sensor without the need to install a sensor in every workload.” 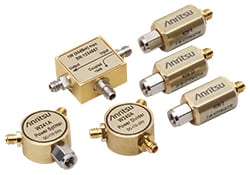 –Anritsu introduced a series of new connectors designed for high-frequency measurements. The new coaxial components include a W1 power divider, directional coupler and attenuators and a connectorized power splitter. The company noted that the connectors are not band-limited and support a frequency range covering DC to 110 GHz.

-Service assurance and network monitoring company Polystar said that it has achieved ISO 9001 and 27001 certifications, which cover quality and information security management. The company noted that the 27001 certification touches on how it fulfills the obligations of the new GDPR data protection regulations.

-Network performance monitoring company Accedian has a new VP of marketing. Kaela Loffler joins the company, having formerly served as VP of channels and marketing at service assurance company Netrounds. At Netrounds, Loffler was responsible for the company’s strategic marketing plan and led the company during a marketing push to educate the market on new technology while establishing the company as an industry challenger.

–Tektronix Testing Services has expanded its vibration and shock testing capabilities, adding a sixth electrodynamic vibration system to its Wayne, New Jersey lab so that it can offer faster testing of electrical components for high-stress environments.