Rohde & Schwarz’s deep packet inspection specialist, ipoque, has launched a new network traffic analytics offering for network operators that supports up to 100 gigabit network speeds and is designed to be used for network planning, product marketing and customer care.

R&S Intra has real-time reporting capabilities (with a reporting rate of one second), and it has analytics APIs that connect to any big data system, the company said. It has a proprietary DPI engine and can operate as a standalone analytics system, a way of extracting data from the network to feed to other big data systems, or act as both a data aggregator to other systems while provide its own reports and insights.

“To compete in today’s rapidly-changing marketplace, CSPs can’t afford to operate in siloes,” said Dirk Czepluch, CEO at ipoque, in a statement. “CSPs need to operate efficiently – in terms of both securing and acting on network data insights. Data shows its true value when analyzed across departments, combined with other sources of information and amassed in a conclusive, multi-purpose pool. We created R&S Intrain response to CSP demands – giving them the ability to extract value from their networks, use data in a more agile way and accelerate time to action.”

In other test news:

–EXFO launched what it says is the first automated offering that combines testing of polarity, continuity and connector cleanliness in fiber networks with reporting capabilities.  Those three test types, EXFO said, are critical for validating multi-fiber push-on 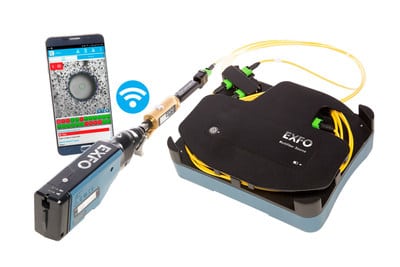 The ConnectorMax MPO Link Test Solution uses a light source at one end of the cable with a fiber inspection probe at the other end,  which EXFO said is an industry first. It gives pass/fail analysis for 12 and 24-fiber links in a single report, the test company added.

“Telcos are reconfiguring their central offices into data centers (CORDs) and deploying MPO cables with 12, but more and more, 24 fibers. When not properly tested, multi-fiber links can put the entire health of a network at risk,” EXFO said. “Traditional solutions often fall short on design or price, can’t perform all three critical tests or don’t offer analysis and reporting capabilities. Customers are left choosing between solutions that are either too much for what they really need (and too expensive) or sorely lacking in features and fit. What’s more, they often have to buy different units to get the job done.”

“The market was missing a quick, reliable and less-costly method to test multi-fiber cables before installation, so if outages occurred technicians would be certain their pre-tested links were not the cause,” said Stéphane Chabot, EXFO’s VP for test and measurement, in a statement. He added that the new offering “provides a fit for purpose solution that helps our customers test and turn up networks right the first time—making deployments faster, more efficient and cost effective.”

–Keysight Technologies has expanded its relationship with Asus to include 5G device development. Asus will be using Keysight’s 5G network emulation offerings for 5G NR device development and verification of features such as beamforming and beam management for both sub-6 GHz and millimeter wave frequencies, the test company announced. It added that Asus will use a compact antenna test range chamber for indirect far-field testing, to characterize and validate devices under real-world conditions.

-Korean auto parts manufacturer Mando was recently granted a permit for autonomous vehicle testing in California. Mando says it is the second Korean company to obtain such a license (after Samsung) and the first Korean automotive to do so. Mando is developing an autonomous vehicle platform called Hockey, and the company opened a research and development center in Silicon Valley last year in order to collaborate with locally based companies in the space and find promising start-ups to work with.

–The University of New Hampshire’s InterOperability Lab has expanded its Ethernet testing services. The new testing service cover electrical and optical conformance testing for 50, 100, 200 and 400 gigabit Ethernet specifications: IEEE 802.3bs and 802.3cd. INH-IOL said that the testing “[focuses]on the industry shift to PAM4 [signalling]” and added that it has plans to offer interoperability testing as the higher-speed Ethernet products go into development and deployment.

–Tektronix has made a number of IP features standard on its Prism media monitoring and analysis solution for broadcasting. The test company said that deployment of IP infrastructure to support broadcast is increasing, and that “IP networks are the future of broadcasting.”