WASHINGTON, D.C.–The use of wireless networks to support the delivery of healthcare services is gaining momentum and acceptance, but making sure the connectivity — and the policies to ensure that telehealth provides effective care and that doctors get paid — is a key consideration, according to experts during a panel discussion on the topic.

Sylvia Trujillo, senior Washington counsel for the American Medical Association, said that the adoption of telehealth by doctors is dependent on a number of factors: validated evidence that the approach is clinically effective; a payment pathway; whether there is additional liability exposure for the physician; interoperability and infrastructure availability; and training of medical professionals to use new technology-based tools and integrate them into their workflows.

The panel, hosted by the Internet Innovation Alliance, included both policy experts and practicing physicians, and it was followed by a discussion with Federal Communications Commissioner Brendan Carr, who has made telehealth — and its relationship to the deployment of 5G networks — one of his areas of focus as commissioner.

Carr told the audience that as he has made visits around the country, he has had a chance to see telehealth at work: in the Mississippi Delta, for example, where tablets and Bluetooth-connected monitoring devices are being used to remotely monitor the health of patients with diabetes. IPads remind patients daily to check their blood sugars and provide instant feedback on the results, with recommendations on daily diet, and the results reported from the first year of the pilot project (which has been running since 2014) included a 7% reduction in A1C,  and monthly savings in health care costs of $28,000. The state of Mississippi’s Medicaid program could see $189 million in savings a year, according to the FCC, if 20% of the state’s diabetic population enrolled in the program and saw similar results.

In August, the FCC unanimously approved a proposal by Carr to expand its telehealth initiatives and establish a new, $100 million fund Connected Care Pilot Program aimed at low-income Americans, especially veterans and those living in rural areas. The FCC’s comment period on that program recently closed, and Carr said that the commission is now going through those comments in order to move toward an order.

On the policy side, much of the discussion focused around Medicare, due to the size of the patient population and its influence in the healthcare space — if federal health programs will cover services delivered by telehealth, that can be a key driver for both development and adoption of such services. And in terms of specific diseases that can benefit from telehealth services, diabetes was the major driver, because it is so widespread in the population and because there are clear benefits to monitoring and helping prevent some of the more serious complications from developing. Morgan Reed, president of ACT — The App Association, showed a floor mat that can be used to detect temperatures in diabetes patients’ feet for early detection of foot ulcers, simply by having the patient step on the mat for less than 30 seconds. The feedback from such a mat can alert patients to make behavioral changes that can mean the difference between keeping a limb or further ulcer development that can lead to amputation, Reed said. 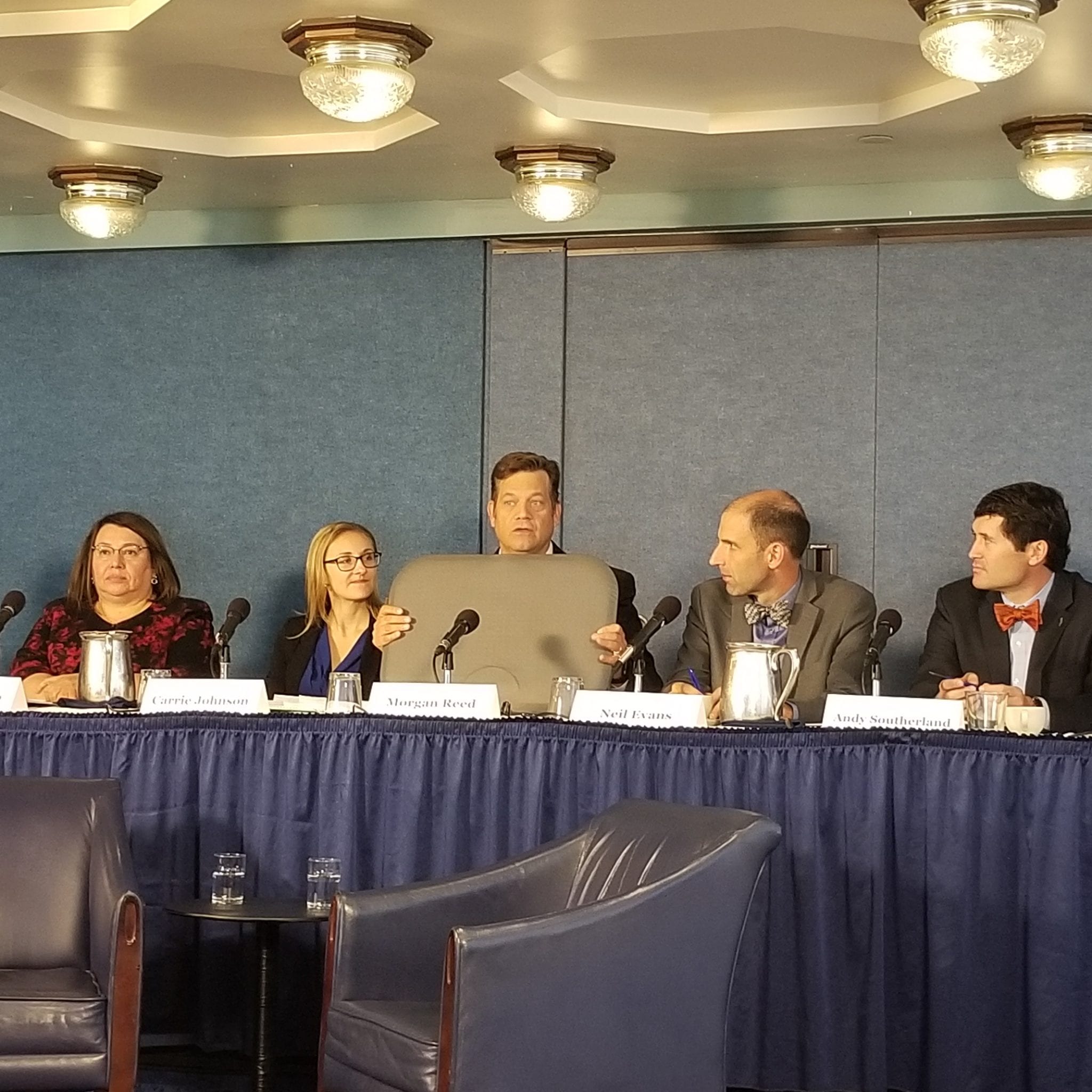 Reed also noted that even in low-income and remote areas where most people don’t have personal computers, most people still have smartphones — which represents an opportunity to deliver telehealth services.

Dr. Andrew Southerland, an associate profession of neurology and practicing neurologist with the University of Virginia Health System, discussed the development of UVA’s Telestroke program, which provides stroke-related care. Southerland said that particularly in the case of stroke, it isn’t just about providing care to remote areas where practitioners may not be available — the element of time is also crucial. So technology-based remote care that can provide rapid assessments can be valuable in urban and suburban areas as well.

One of the big pieces that has to fall into place, as Trujillo said, is the payment factor. Ryan Howe, senior technical advisor at the Center for Medicare and Medicaid Services in the hospital and ambulatory policy group, said that there have been “really significant changes” to pay more broadly for remote patient monitoring services in the last couple of years. Several panelists remarked that a new schedule of fee payments is due soon and it is anticipated to move further in this direction.

Connecting health facilities — often via wireline networks — is also important, Carr noted. He cited the case of one rural clinic in Nevada that was the sole healthcare provider, which was in danger of shutting down until it was able to establish remote care via a new fiber connection, with a doctor in a larger town providing care with the help of a nurse in the local office and video sessions with patients. But once patients leave brick and mortar facilities, they still need care — and that’s why mobile and wired network access and bringing telehealth services to people’s homes, is important. That also includes telehealth services for first responders such as emergency medical technicians and ambulance services, noted Carrie Johnson, a strategy, policy and tribal affairs specialist with AT&T-FirstNet. Johnson said that FirstNet customers include emergency medical service providers such as Acadian Ambulance, an EMS provider in Texas, which is using both FirstNet-enabled handheld devices and mobile gateways in its ambulances for communications and real-time data sharing. Two-way video between paramedics and doctors to facilitate treatment in ambulances, or sending photos and other data ahead to alert emergency room medical staff to the status of incoming patients, are two examples of how the FirstNet network can be used for telehealth-related services, Johnson said.

Carr said that 5G’s greater speeds and capacity to support connected devices will be particularly important for telehealth and that it is important to make sure that “every community has a fair shot” at the benefits 5G will enable, whether in telehealth or other areas. He cited two recent developments — the FCC’s exemption of small cells from certain reviews that large tower sites have to undergo, as well as establishing streamlined regulations that, in part, override state and local regulations that slow or prohibit deployment of wireless infrastructure — as two ways that the FCC is supporting 5G deployment across the country.