While it is true that Sprint already has communicated the most aggressive 5G roadmap in the world being the only carrier promising a nationwide 5G network in urban areas by 2019, it is no secret that Sprint’s deployment track record is not on par with that of many other carriers. One of the primary drivers behind our delta between the 2018 capex and mobile infrastructure projections in the US is the added uncertainty that Sprint would complete its previously communicated targets on time.

T-Mobile, on the other hand, has a very good track record of upgrading its network – Dell’Oro estimates suggest T-Mobile upgraded ~37 K LTE sites over a ~ 2.5-year time frame. Also, we believe T-Mobile’s performance over the past couple of years shows that T-Mobile understands marketing. The combination of Sprint’s 2.5 GHz assets, T-Mobile’s track record of rollout advancements, and T-Mobile’s marketing know-how and brand form the basis for a compelling 5G story. 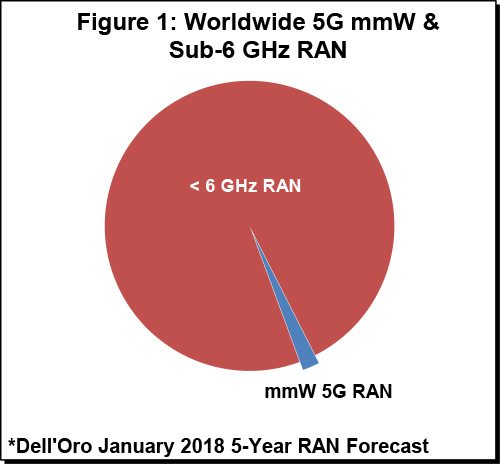 The New T-Mobile US would put pressure on AT&T and Verizon to accelerate their 5G mobile broadband (MBB) deployments. Since the current CBRS proposal in the US is not ideal for larger outdoor carrier deployments, AT&T and Verizon have focused their 5G efforts more on the millimeter wave (mmW) spectrum. Or as Bill Stone with Verizon put it during the Brooklyn 5G summit, “mmW was the best option to push the envelope short-term for Verizon.” AT&T and Verizon’s 5G strategies to focus on mmW for hotspots and LTE-Advanced on the sub 6 GHz macro would likely have been a reasonable MBB strategy if Sprint and T-Mobile go at it alone. T-Mobile’s marketing magic would only go so far using 31 MHz of 600 MHz spectrum, and Sprint’s 2.5 GHz assets are only so good without the brand. But with the new T-Mobile US, AT&T and Verizon surely would be more pressed to accelerate their 5G MBB plans. And since mmW is expensive to deploy in larger scales (Figure 1), the merger by default puts the pressure back on the FCC to get its mid-band policies together. In all, it would be a positive for the overall 5G momentum.

There will be synergies

At the same time as the 5G momentum will improve, total investments will be revised downward to factor in the combined 50 K sites of avoided capex/opex. From a mobile infrastructure equipment perspective, we anticipate the companies will continue to focus on Massive MIMO and 600 MHz deployments over the short-term/near-term. New sites will be needed to support the 2.5 GHz spectrum. However, there will be site/capacity synergies in the PCS/AWS spectrum. Aggregate base station capacity synergies will likely deviate from the implied site synergy estimates given the asymmetric distribution of the cells. 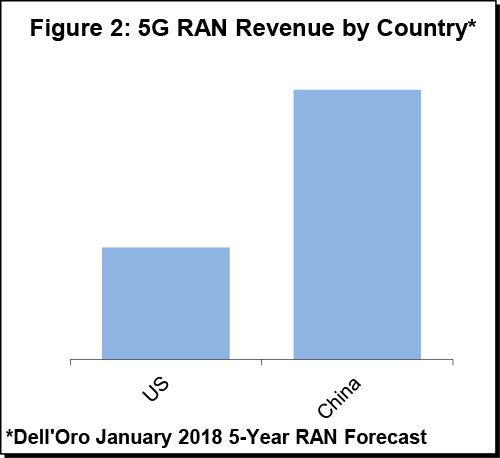 Three healthy players could be a positive

While regulators believe four players is essential to maintain healthy competition, the timing is right to put some of the focus back on the operators and their ability to gain the scale needed to build out 5G. Ever since Sprint started promoting that lower prices deliver more value to consumers than superior reliability, it is safe to say that I don’t plan to put my kids in an autonomous vehicle that is relying on Sprint’s cellular network to identify a non-line-of- sight vehicle any time soon. Three players will ultimately lead to some price stability which will be a positive for the general health of the telcos and free up resources to pursue new value-driven opportunities/5G use cases. Even if it is a given that the base case capex of the new company will be lower than that of the standalone carriers, we need to factor in the possible upside from the new 5G dynamics in addition to comparing site and capacity savings.

What is the likelihood the deal will happen?

The current strategy focusing on US and China relations and the importance of winning the 5G race is interesting in our view.  Per Dell’Oro Group’s 5-Year RAN forecast, China’s 5G RAN investments are expected to be more than 2x the size of the US 5G NR market (Figure 2). Given the current spectrum landscape in the US, the new T-Mobile US would be a compelling solution for the US to catch up in the race towards 5G and more likely to materialize than the rumored shared national 5G network. That said, it is difficult to assess from where we are sitting if the expected value of the T-Mobile/Sprint deal happening is 0.5 or 0.75, even if our bet is on the latter.